The roots of the Department of Statistics at The Ohio State University began to form with the 1962 appointment of Arnold Ross as chair of the Department of Mathematics and D. Ransom Whitney’s interim service as acting chair for the year prior to Ross’ formal arrival at Ohio State in 1963. Jagdish Rustagi was added to the mathematics faculty in 1963 to help develop an interdisciplinary graduate program in biostatistics.

The Statistics Laboratory (precursor to our current Statistical Consulting Service) was also actively involved in statistical consultation across campus under Whitney’s leadership. Based heavily on the reputation of the Statistics Laboratory, Ross agreed in 1970 to the creation of the Division of Statistics within the Department of Mathematics, complete with its own independent budget, and Whitney was appointed as the inaugural chair of the division. The next three years saw extensive growth in the fledgling program, including the hiring of six additional faculty members (Tad Archambault, Ed Dudewicz, Keith Eberhardt, Ramesh Srivastava, Tom Willke and Doug Wolfe).  Some aspects of these early years of the Department of Statistics are documented in Tom Willke's 2003 interview with Whitney. 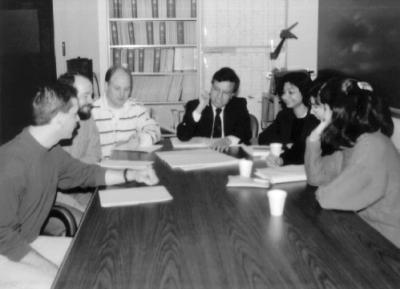 The Department of Statistics was formally established in 1974 with these eight initial faculty members, chaired by Whitney, and a small number of graduate students enrolled in its MS and PhD programs in statistics. The tagged Master of Applied Statistics (MAS) degree was added as part of the graduate program with its approval in 1978. The department also started a PhD program in biostatistics in 1980, which it now administers as the Interdisciplinary PhD Program in Biostatistics, jointly with the Division of Biostatistics in the College of Public Health. In 2014, the department partnered with the Department of Computer Science and Engineering to create an undergraduate major in data analytics.  More recently, in 2018, the department launched an undergraduate major in statistics.

Under the guidance of six subsequent chairpersons (Jagdish Rustagi, Prem Goel, Tom Santner, Doug Wolfe, Mark Berliner and Steve MacEachern), the Department of Statistics has steadily grown over the years in both size and academic reputation.

[pdf] - Some links on this page are to Adobe .pdf files requiring the use of Adobe Reader. If you need them in a more accessible format, please contact webmaster@stat.osu.edu.